Pixar logo About Us - Overlooked 2 Overbooked

KATI, as written by Brian

Kati was born and raised in Finland. That means a lot when it comes to how she approaches work, photography, customer service…just about everything. In the US we would say she’s “old school”. She does a job to the absolute best of her ability, even if she could get away with less. And no matter how great a job she does, she’s never completely satisfied (know anyone like that?).

Kati has always been captivated by all the visual arts. She can paint, draw, take amazing photos and more. She became a top-notch video editor, working on projects for Fox and Disney soon after graduating college.

She’s extremely good at explaining HOW to do the things that sometimes come naturally to her. That’s why I am so excited about the launch of her O2O course. I KNOW how much your listing photos will improve once you’ve gone through her video lessons. She knows how to make sure that everything important is included, AND everything inconsequential is left on the cutting room floor.

Our O2O business is designed to be “boutique” and personal. That means if you buy the O2O course, you’re going to experience the privilege of being friends with Kati (via video, Skype, email, etc.) And that may turn out to be the biggest bonus of all!

BRIAN, as written by Kati

I slightly regret the idea of writing each other’s bios because writing is not my thing. It’s Brian’s. Writing and numbers. He’s that rare combination who’s great with language and great with math. This bio will probably be twice the length of the one he wrote for me because he can get to the point faster. You can’t slip a thought error about percentages past him. He would dance circles around the Sharks on Shark Tank (Dragon’s Den for some of you). At one point I asked him to write content for our website about what our course really offers. I figured he’ll mull it over (like I would have!) and send me an email in the morning. Nope! 15 minutes later he had it done. Damn it! There goes my coffee break.

The one thing you should know about Brian is that he’s smart. Not just because of his extensive education (Columbia University and so on), he’s just that type. I don’t think his education made him smart, I think he (unconsciously) just followed his ability. If there’s logic to be found in something, he’ll find it. Sometimes to a fault. If something is clearly the best choice for a person yet they don’t do it, he can’t see why. It’s adorable.

This definitely comes up in the many horrible ads and rental listings we’ve seen. He just can’t see why someone would shoot themselves in the foot like that. Before our business, he was the fourth employee of a tech start-up that qualified for the Inc 500 list. He’s the only person I’ve met who can make annual savings sound compelling and relatable. This trait is actually great for us because not only can he crunch the numbers for hosts but he can come up with 20 good reasons why our course is good for them.

We have a lot of opposite skills which makes us great partners. Brian is a great host, I’m a great guest. He can find the best local food joint in any country, I will try their craziest food. He can talk me off the ledge of fine-tuning our course to death and remind me that “done is better than perfect” and that “perfect doesn’t exist.” When he gets frustrated by his unresponsive web browser, I can come up with 3-5 workarounds without breaking a sweat.

Brian’s a great resource for us because he understands what I’m trying to teach but he has our customers’ perspective in that he’s not a photographer. He knows how to interpret my photography techniques and turn them into something comprehensible. To honor him, I’ll attempt an analogy (oh boy, this could be a half hour, he would have this in 60 seconds..): he’s like gravity. It’s what makes sense out of the Universe but also what makes sports fun to watch. Without gravity, I’d just be taking photos and tweaking colors in a vacuum, spinning out of control. He can at least pull me into orbit so others can make sense out of what I’m doing.

The 12 Attributes that Make or Break Airbnb Photos
Read More
Why you need to reorder your listing photos (and how to do it)
Read More
Expectations vs. Reality: About Realistic Listing Photos
Read More 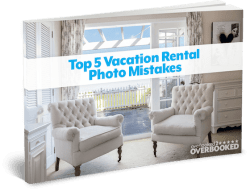 ​Make sure your listing photos send the right message!